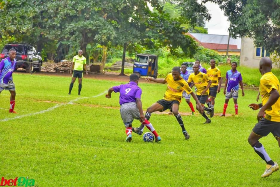 A major upset was witnessed during the opening tie of the 2019 Bet9ja Royal Cup at the All Saints Anglican Church Field in Asaba, when Texas Sports Academy beat Royal FC through penalty kicks.

The game, watched by the Local Organizing Committee, LOC, chairman, Marvel Dick and the tournament's chief consultant, Eddie Iseri Ogbemudia of Myron Topclass Sport Outfits, in the company of other Bet9ja agents, saw the largely youthful Texas Sports team struggling with the physical style employed by the far experienced Royal FC side, as both clubs could not create clear cut chances to score in the first half exchanges.

The fixture, however, sparked into life in the second half when Texas Sports Academy's striker Bright Wokoma cleverly intercepted a clearance by Royal FC goalkeeper Ghalifa Danielson at the edge of the 18 yard box and scored against the run of play.

That lead came like a rude shock to Royal FC, as they fought for the equalizer for greater part of the half.

With less than 6 minutes to the end of regular time, Okite Opawandi fired in the equalizer from a set piece situation to drag the encounter into straight penalty kicks to determine the qualifying team.

From the resultant penalty kicks, the two clubs were not willing to let go for one another, with nearly all the outfield players for both sides dispatching their spot kicks with class and aplomb before Royal FC's Danielson struck the tenth penalty kick for his team against the woodwork and Texas Sports Academy's Sunday Chime converted his own to win the tie 10 - 9 at sudden death.

Texas Sports will now meet 90 FC of Asaba in the next round, after the latter beat Skippo FC 4 - 1 in the second game at the Oshimili South center.

In Ughelli South, defending champions Future Stars flogged Marvelous 4 - 1 to move to the next round, while Amazing Grace pipped Striker FC by a lone goal to qualify for the next stage at the Ughelli North center.

Delta Eagles of Ozoro went on a goal scoring spree against Osaro FC of Oyede, as the former walloped the latter 6 - 2 to advance comfortably to the group stage of the competition from the Isoko North center.

At the Oleh Township Stadium, Sundof Academy booked their place in the group stage equally as Isoko South representatives, after they beat Royal Eagles 5 - 3 on penalties. During normal time, the game had in a one all draw.

In Ukwuani, Henfield Academy dealt a mortal blow to Immortal FC with a 1 - 0 triumph to qualify for the group stage, while in Warri North, it was a stroll in the park for Rolly FC, who thumped 12 Disciples of Jesus Christ FC of Koko 4 - 0 to move into the group stage.

In the battle of the Osevan brothers at the Kwale Township Stadium, Osevan Football Academy lost to Osevan Football Club 4 - 0 to secure Ndokwa West's spot in the group stage.

More teams are expected to qualify for the group stage, as the 2019 Royal Cup tourney progresses in other centers.