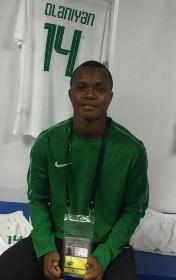 Allnigeriasoccer.com can exclusively report that Manchester City and Arsenal are considering a move for Nigeria U17 international Olatomi Alfred Olaniyan.
The attacking midfielder was one of the Golden Eaglets players observed by Manchester City during the U17 Africa Cup of Nations in Tanzania while the player's camp has close links with the Gunners.
City and Arsenal were expected to run further checks on Olaniyan at the ongoing U17 World Cup but the Sidos Academy wonderkid was omitted from Nigeria's 21-man roster after failing to recover from a knee injury.
The two English Premier League clubs are mulling over whether to invite him to attend trials since they did not have the opportunity to watch him at the World Cup and see his present form.
Meanwhile, Olaniyan, who has returned to full fitness, is training with his Academy in Lagos ahead of a potential transfer to a European club and the 17-year-old has spoken about the performance of the Golden Eaglets in Brazil.
''I didn't go for the tournament because I was injured, I had a little knee injury so the coaches did not want to risk taking me,'' Olaniyan told allnigeriasoccer.com.

''It wasn't too good for the team in the Brazil but they did their best. The captain Samson Tijani, Akinkunmi Amoo and Ibrahim Said were the three players that impressed me the most.''
Asked to name his dream club in Europe and the next step in his career, he answered : ''I don't really have a dream club in Europe, any club that I will develop and there's a chance to play for their first team, that's where I want to move to.''
Olaniyan was at the Murtala Muhammed International Airport (MMIA) in Lagos on Thursday evening to welcome his Golden Eaglets teammates back to the country.
Ifeanyi Emmanuel
Copyright ANS.