...the complete Nigerian football portal
Subscribe
How The English Premier League Race Is Likely To Pan Out
Published: January 21, 2020 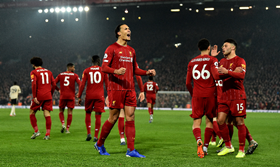 The 2019/2020 English Premier League season has thrown up a few surprises, perhaps none much better than Leicester City who are yet again, pulling up trees and sit pretty third on the standings.

Very little was expected of the Foxes but Brendan Rodgers has got the King Power outfit playing good, incisive football for much of this season and are well deserving of their placing.

And there is the Champions-elect, the immortal Liverpool team that has blown away virtually every one in the division.


The season is still a long way to go, and a lot can happen within that time but there can be no hiding the fact that a lot of things are decided.
While looking for the best sportsbooks to back any outcome for all major Premier League events, as well as any other major football game, you can look up at the best sportsbooks such as 888sport, Bovada and many others which operate online.
Punters are always welcomed to get the best odds for every game here, as well as ensure quick payments on every winning.
Not that they were not expected to challenge anyway, but the manner with which they have navigated their way to the echelon of the table is simply breathtaking, even gutsy at its best.


Come the end of the season, only a crazy punter will bet against the Reds winning their first top flight title since the 1989–90 season — the reason cannot be starker.
With an astonishing sixteen points more than their closest rivals Manchester City, and even a game in hand, it is only a matter of time so the coronation is nigh.
After beating Manchester United 2-0 last weekend to maintain their unbeaten record in the Premier League, there is that feel of invincibility all around Anfield at the moment and even Jurgen Klopp has voiced the fact that it "doesn't feel special somehow" the number of records and point-haul they are accruing: it is worth noting that no team in any of Europe's top five leagues has ever taken more points at this stage of a season than Liverpool has managed.
At a point, it looked Leicester City were primed to be their only challengers, something Nigeria international Wilfred Ndidi had been central to, but they have fallen by the wayside after dropping points recently and even slipping into third.

But then it is on the other end of the table that things gets even more fiercer.

While Aston Villa, Bournemouth and Norwich currently occupy the drop zones, no less than eight teams are still in the dogfight, the likes of Watford, West Ham, Burnley, Brighton and Southampton inclusive.

There might be reason for optimism for a few like Watford who have wantaway Super Eagles striker Isaac Success in their ranks, but is currently looking for a route away from the club due to limited playing opportunities.

The other Nigerian at the club Tom Dele-Bashiru is still on the fringes of the first team though he has impressed in recent weeks when given the chance.

There's even a blockbuster clash between Chelsea and Arsenal on Tuesday night to take in, and you can be the first punter to check out and get the best offside for this cracker on the website.

Best of luck as you do so!