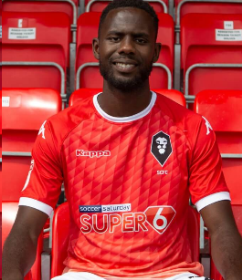 EFL League Two club Salford City have announced their retained and release list following the cancellation of the 2019-2020 season.
Leeds-born Nigerian striker Emmanuel Dieseruvwe is among sixteen first-team players retained for the 2020-2021 season.
The 25-year-old was loaned out to Oldham Athletic in the January transfer window, making four appearances for the club in the fourth-tier before the league was suspended in March 2020.
In their league opener back in August, Dieseruvwe scored Salford City's first ever Football League goal in the 29th minute of a 2-0 win against Stevenage.
He went on to play 26 more games for the Greater Manchester club before he was farmed out on loan to Oldham Athletic.
His other clubs in England include Sheffield Wednesday, Hyde, Fleetwood Town, Chesterfield, Mansfield Town, Kidderminster Harriers, Boston United and Chester.
Igho Kingsley
Photo Credit : salfordcityfc.co.uk