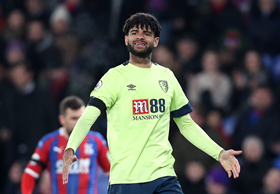 Allnigeriasoccer.com has been told that Bournemouth's combative midfielder Philip Billing remains committed to the Danish national team amid speculation in the local media that he had switched allegiances from the Scandinavian country to Nigeria.
Rumours continue to surface surrounding the international future of the former Huddersfield Town star because he is not yet cap-tied to his country of birth, Denmark.
Billing is inching closer to making his senior debut for Denmark, having made the bench for friendly matches against Kosovo and Luxembourg, plus European Championship qualifiers against Switzerland, Gibraltar and Georgia,
but was not called up by manager Age Hareide for the team's last two games.
Born in Copenhagen 23 years ago, he became provisionally cap-tied to his country of birth after going the distance in a European U21 Championship qualifier against Faroe Islands in August 2017.
Billing is hopeful of breaking into the Danish squad in the coming months and has not filed a request for a change of association.
The Nigeria Football Federation attempted to lure the highly-rated midfielder to represent the Super Eagles at the 2019 Africa Cup of Nations but he turned down the opportunity.
Another Danish-Nigerian midfielder worth keeping an eye on is FC Nordsjaelland's Tochi Chukwuani, who captains Denmark U17 team.
Chukwuani is the youngest Nigeria-eligible player to feature in Europe's top fifteen leagues so far in the 2019-2020 campaign.
Ifeanyi Emmanuel
Photo Credit : afcb.co.uk
Copyright ANS