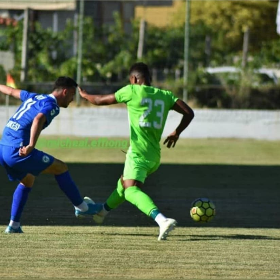 Red-hot Ekemini Eyoh Effiong shot his club Apolonia Fier to the top of the Albanian First Division Group B playoffs with a brace against visiting KS Lushnja on Monday night, allnigeriasoccer.com reports.
The Lagos born striker continued his scoring streak after he grabbed his side's lone goal in their 2-1 first leg home loss to Erhun Obanor's club KS Kukesi in the Albanian Cup last Thursday.
Fondly called Michael by Apolonia fans, he scored his first goal in the 68th minute from a glancing header off a corner kick to shoot his side 2-1 up.
He then popped up in the 93rd minute to score a beautiful solo goal, taking the ball on a run from the left flank and displacing three defenders before slotting it into the bottom far right corner of the goal beyond the outstretched hands of the Lushnja goalkeeper.
Speaking after the match he told allnigeriasoccer.com that even though his contract with Apolonia runs out in the summer, the season has 5 matches to go and he is determined to do all he can to see that Apolonia maintain their position at the top of the standings to ensure automatic promotion to the Albanian Superliga.
Predominantly a centre forward, he has effectively filled in at the left flank and even left full back position to help his team.
Igho Kingsley