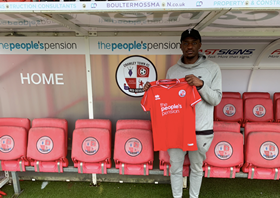 English Football League Two club Two Crawley Town have announced their retained and released list, informs the official website of The Reds.
Former West Ham youth-teamer of Nigerian descent, Emmanuel Adebowale and twenty other players have been reengaged for next season.
The 22-year-old still has a contract with Crawley Town until the end of the 2021-2022 season.
He joined the fourth-tier club in January 2020 and made his full debut against Salford City the following month while he was a non-playing substitute in games against Carlisle United, Stevenage and Oldham Athletic.
Apart from West Ham, the Crawley Town number 37 lists Sheffield United, Sheffield FC,Goole, Hayes & Yeading United, Bishop's Stortford, Dover Athletic, Bognor Regis Town and Eastbourne Borough as his previous clubs.
Crawley Town finished the curtailed 2019-2020 season in thirteenth place with 59.68 points-per-game.
Igho Kingsley
Photo Credit : crawleytownfc.com
Copyright ANS