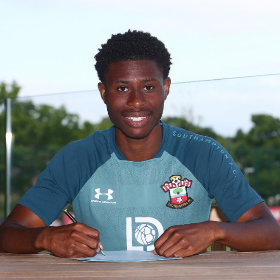 Southampton are sweating over the fitness of Nigerian winger cum playmaker Nathan Tella ahead of their visit to Old Trafford, where they face an in-form Manchester United side on Monday, July 13.
The former Arsenal schoolboy showcased himself in the Premier League 2 before he was promoted to the Saints first team for the remainder of the 2019-2020 season, and went on to make his professional debut vs Norwich City last month.
Tella was an unused substitute in matches against Arsenal and Watford but his name disappeared from the team sheet in back-to-back games against Manchester City and Everton due to fitness issues.
With Sofiane Boufal and Moussa Djenepo not available for selection due to injury, Tella would have been in contention for an advanced midfield role assuming he was fit, Saints boss Ralph Hasenhuttl revealed.
"Yes, that’s right with them [Boufal and Djenepo] both out, we have lost two tens, so it is important that the guys stay fit," Hasenhuttl was quoted as saying by Hampshire Live.

"It is always a very demanding job to do, not only physically, but mentally and tactically, and we don’t have so many alternatives at the moment.

"Will Smallbone can play there also, it is not his best position, but he can do it. We normally have Nathan Tella and Will Ferry as well, but we have a few problems with injuries.

"At the moment we can handle it quite well, but we must improve it."
Last week, Tella committed his long-term future to Southampton by signing a new three-year contract until June 30, 2023.
Igho Kingsley
Photo Credit : southamptonfc.com
Copyright ANS