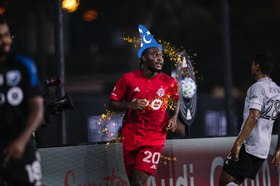 American-born striker of Nigerian parentage Ayo Akinola is in the running for Major League Soccer's Goal of the Week.
The official website of MLS has shortlisted five goals which are in contention for the AT&T Goal of the Week – MLS is Back Round 2, with strikes from Akinola, Frankie Amaya (FC Cincinnati), Mohamed El-Munir (LAFC), Jesus Medina (New York City) and Kacper Przybylko (Philadelphia Union) making the cut.
Aged 20, Akinola netted his first career hat-trick as Toronto FC defeated Montreal Impact in a Canadian derby on July 17.
He showed his genius by dinking the ball over the goalkeeper to bag his treble and the goal scored in the 83rd minute has been nominated.
Akinola is having his best spell as a professional footballer in terms of goals scored - five in his first two games of the MLS is Back Tournament.
He was named in MLS Team of the Week for round one of MLS is Back Tournament.
Igho Kingsley
Copyright ANS
All rights reserved. This material, and other digital content on this website, may not be reproduced, published, rewritten or redistributed in whole or in part without prior express written permission from allnigeriasoccer.com