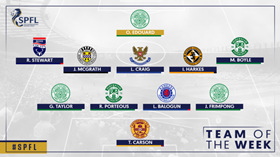 Nigeria international Leon Balogun has been named to the Scottish Premiership Team of the Week by the official website of the Scottish Professional Football League following the conclusion of the matchday one fixtures.
Eight days after his transfer was announced, the central defender was handed his competitive debut by Liverpool hero Steven Gerrard as Rangers registered a 1-0 win against Aberdeen.
Balogun's performance was made even more impressive by the fact that he had trained with his teammates for few days before helping goalkeeper Allan McGregor to post a shutout.
The former Brighton & Hove and Wigan Athletic star was partnered by Hibernian's Ryan Porteous in central defence in a 4-3-2-1 formation in the Team of the Week.
Explaining why Balogun was named in the ceremonial XI, Craig Fowler wrote : "A very impressive start from the summer signing saw him dominate opposing attackers in Rangers' 1-0 victory over Aberdeen as the two clubs got the Scottish Premiership season under way".
Per stats provided by Whoscored, Balogun won a game-high six aerial duels, made a team-high three clearances, was accurate in 88.4 percent of his passes and made 77 touches in the game between Aberdeen and Rangers at the
Pittodrie Stadium.
Ifeanyi Emmanuel
Copyright ANS