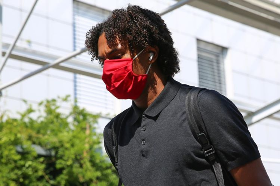 Nigerian Federation target Joshua Zirkzee is in the frame to make his second Champions League appearance of the season in Friday's eagerly anticipated quarterfinal meeting between Bayern Munich and Barcelona, allnigeriasoccer.com reports.
The Netherlands U19 international was not in Bayern Munich's matchday squad vs Chelsea last weekend, missing the game through a foot injury but was surprisingly named in the traveling party to Portugal.
Zirkzee's injury is not as bad as first feared as he trained with the rest of the squad in Wednesday morning's workout in Lagos, Southern Portugal.
He is competing with Robert Lewandowski, Ivan Perišić, Thomas Müller and Serge Gnabry for one of the spots in attack against Barcelona.
The last time Zirkzee played competitively for Bayern Munich was approximately two months ago when he came off the bench for the last 26 minutes against SC Freiburg.
Although he was not included in Bayern's List A, he is eligible to represent the German Bundesliga champions via the List B.
Ifeanyi Emmanuel
Photo Credit : instagram.com/zirkzee
Copyright ANS