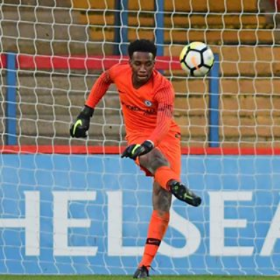 Talented Nigeria-eligible goalkeeper Kelechi Chibueze has been handed his full U18 Premier League debut by manager Ed Brand in the ongoing game between Chelsea and West Ham at Cobham Training Center, allnigeriasoccer.com reports.
This is the first time in Chibueze's career that he has been included in the starting lineup for Chelsea U18s since joining the club at U8 level.
The Lewisham-born glovesman was an unused substitute on the opening day of the season against Brighton and was previously named to the bench for matches against Norwich City and West Ham during the 2018-19 season.
Last season, the 16-year-old Chibueze was behind former Golden Eaglets invitee Prince Adegoke in the pecking order of goalkeepers for the U16 team but has been handed an opportunity to stake a claim for a permanent starting shirt against the Hammers.
Adegoke is currently on the sidelines after tearing his meniscus before a pre-season friendly against Crystal Palace.
While Adegoke is focused on representing Nigeria youth teams, his goalkeeping rival Chibueze has played non-binding friendly matches for England U15 and U16 national teams.
Ifeanyi Emmanuel
Photo Credit : instagram.com/kchibueze1
Copyright ANS