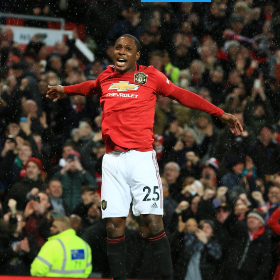 Manchester United hero Paul Ince has given his thoughts on why manager Ole Gunnar Solskjaer starved Odion Ighalo of game time when he joined the club on loan from Shanghai Shenhua in the January transfer window.
Ten months after his return to the English Premier League, the former Watford striker has not made his first start for the Red Devils in the top-flight, with his twelve appearances to date coming off the bench and he was in action for a paltry 99 minutes.
While Ighalo has been ostracized at Manchester United this season for key games in the Premier League and Champions League, Uruguay marksman Edinson Cavani has been getting opportunities and made an impact off the bench with three goals and an assist in his last three league games.
Ince is of the opinion that Ighalo has not been a regular in the United side because Solskjaer doubts his abilities.
"Cavani's in his 30s, he can't start every game, but what he can do is come on and make an impact like we saw [at Southampton]," Ince said on Premier League Productions (via Goal).

"Whether he can start from the beginning, I'm not too sure. I think he might want to, but he's got options now.

"When Ighalo came over from China, he was coming on for the last 10-15 minutes because he wasn't too sure about him. "
The 31-year-old Ighalo has played just three of Manchester United's fifteen matches in all competitions this season.
Igho Kingsley
Copyright ANS