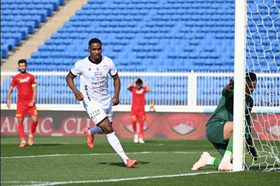 Odion Ighalo has disclosed that Super Eagles captain Ahmed Musa played a key role in his decision to move to Saudi Professional Football League table-toppers Al-Shabab following his departure from Manchester United in the January transfer window.
Musa swapped the English Premier League for Saudi Arabia after putting himself in the shop window at the 2018 World Cup and the winger enjoyed success in his first season, helping Al-Nassr win the league title.
Ighalo contacted his ex-international teammate and the former Leicester City man had nice things to say about the Saudi Pro League.
In an interview with Sada Al Malaeb, Ighalo said : "Musa praised the strength of the league, and by virtue of my friendship with him, I was watching his matches, and the Saudi League is an important and strong league, and I'm happy to be here as everyone in the club works professionally and provides all means of success.

"In fact I joined Al-Shabab to give my best, make the difference and help them win the league and delight the fans.

"Al-Shabab is at the top of the standings but the five-point difference does not mean anything, so we have to continue the good work and continue winning."
Ighalo, 31, has endeared himself to the Al-Shabab fans with his impressive performances since joining the club, scoring three goals and providing an assist in five games.
Ifeanyi Emmanuel
Copyright ANS