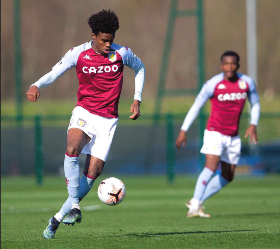 Liverpool and Manchester United have suffered a major blow in their pursuit of Aston Villa midfielder of Nigerian descent Carney Chukwuemeka.
Despite signing his first professional contract last October, the England youth international has been linked with top Premier League and European clubs.
According to the Daily Star, Aston Villa have made it clear that they do not want to part ways with Chukwuemeka as they have plans to fast-track him into the first team.
Chukwuemeka has been likened to former Arsenal captain Patrick Vieira due to his build and his ability to drive past players.
The 17-year-old has trained with Aston Villa's first team on countless occasions this season and was in contention to make his professional debut against Liverpool in the third round of the Emirates FA Cup but was omitted from the roster because he was part of the group that went into isolation following a COVID-19 outbreak at the club.
He has made the matchday squad for Premier League games against Leicester City and Manchester City this year - a testament to how highly he is rated by Aston Villa first team manager Dean Smith.
Chukwuemeka is back in the headlines again after scoring a hat-trick and providing an assist in Aston Villa's 6-1 rout of  Newcastle United in the quarterfinals of the FA Youth Cup.
Igho Kingsley
Photo Credit : avfc.co.uk
Copyright ANS