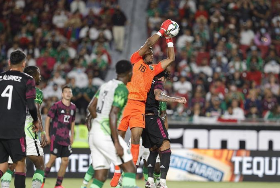 All Nigeria Soccer's Izuchukwu Okosi made a few observations from the Super Eagles' 4-0 defeat to Mexico in California in the sixth meeting between both sides.

1. Herrera Pleads With Fans Over Shouting

Mexico captain Hender Herrera went over to the Mexican fans and pleaded with them to observe Covid-19 protocols and not shout during the duration of the game.

Did the fans adhere to that? A couple of them still shouted in ecstasy when their team scored the goals.

2. Eagles' Two Sides Of Their Game

The  Super Eagles looked to match whatever their opponents threw at them.  Even at 2-0 down it seemed the score flattered the Mexicans as both goals came quite early.

The wild jubilation of the Mexican bench when it became 3-0 was evidence of the nerves earlier.

The performance of Stanley Nwabili was encouraging albeit the third goal he conceded was a blot in that outing.

He made two great saves in the first half but was quick to get off his line for the third and fourth goals of the Mexican side.

It will be interesting to see him play for the Super Eagles main team even if as a back up to the regulars.

Izuchukwu Okosi
Copyright ANS
All rights reserved. This material, and other digital content on this website, may not be reproduced, published, rewritten or redistributed in whole or in part without prior express written permission from allnigeriasoccer.com