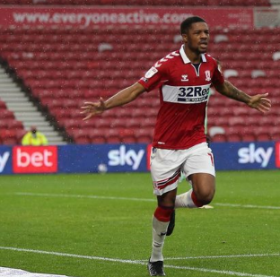 Turkish giants Besiktas are thrashing out terms with EFL Championship club Middlesbrough over the signing of Super Eagles hopeful Chuba Akpom this summer.
The Black Eagles have turned their attention to the former England youth international following the injury sustained by one of the strikers on their wanted list, Luuk de Jong, while ex-Chelsea star Diego Costa's wage demands are proving to be a stumbling block to a proposed move.
Allnigeriasoccer.com can exclusively report that Middlesbrough manager Neil Warnock will sanction the transfer of Akpom to Besiktas but on one condition, if it's a loan move.
Despite the arrival of Uche Ikpeazu, Warnock feels that he does not have enough experienced strikers on his roster, hence his decision to allow the Nigerian to move to the Istanbul side only on a loan deal.
Beskitas have been following the Arsenal academy product for some time and attempted to sign him on a permanent deal last summer but were unsuccessful.
Akpom played the second half of Boro's first pre-season friendly on July 14, a 3-0 win over non-leaguers Bishop Auckland.
In 39 outings for Middlesbrough last season, the 25-year-old found the net five times and assisted two others.
Ifeanyi Emmanuel
Copyright ANS