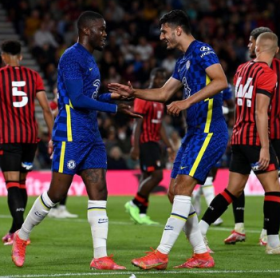 Newly-promoted Italian Serie A club U.S. Salernitana 1919 are reportedly in the mix to sign Super Eagles hopeful Ike Ugbo.
According to Italian broadcaster Sportitalia via Insidefutbol, Salernitana have held talks with Chelsea over the signing of the former England youth international.
Salernitana are in the market for a center forward and have put Ugbo on top of their wishlist.
Though Ugbo trained with Chelsea's first team in pre-season, his future at Stamford Bridge is up in the air after manager Thomas Tuchel omitted him from the roster for the two matches in the Mind Series against Arsenal and Tottenham Hotspur.
Several clubs have been linked with the 22-year-old, with Racing Genk and PSV Eindhoven among his suitors.
Ugbo is very much in demand after putting himself in the shop window while on loan at Cercle Brugge, scoring seventeen goals in 34 games over the course of the 2020-2021 campaign.
He has entered the final year of his contract at Chelsea and the European champions risk losing him for nothing next summer if his contract is not extended.
Ugbo previously had loan spells at Barnsley, Milton Keynes Dons, Scunthorpe United and Roda JC.
Ifeanyi Emmanuel
Photo Credit : chelseafc.com
Copyright ANS