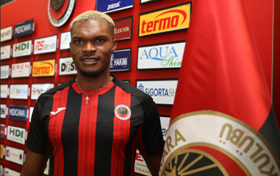 Russian Premier League side Rubin Kazan announced via their official website on Wednesday that they have completed the signing of Russian-Nigerian attacker German Onugkha on loan from Danish club Vejle BK.
The 25-year-old will remain on loan at Rubin Kazan until the end of the 2021-2022 season, with the option to buy.
The Moscow-born Onugkha previously played for FC Zenit Penza, FC Volgar Astrakhan, FC Krasnodar, FC Tambov and PFC Krylia Sovetov Samara, and spent his formative years as a footballer with the youth teams of Atmis Kevdo-Melsitovo and FK Narovchat.
He has totaled seventeen appearances in the Russian top-flight, scoring four goals in 787 minutes of action.
Turkish second-tier club Genclerbirligi S.K. have added Beerschot V.A. striker Blessing Eleke to their squad, signing him on loan for the remainder of the campaign, informs the official website.
On his curriculum vitae, the Flying Sports product lists ND Gorica, NK Olimpija Ljubljana, FC Ashod and FC Luzern as his previous employers.
Igho Kingsley
Photo Credit : genclerbirligi.org.tr
Copyright ANS