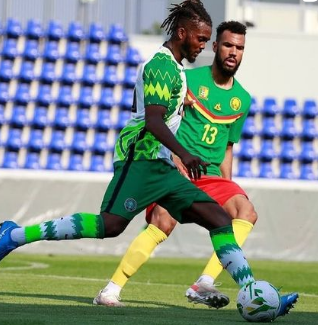 It took Chidozie Awaziem only eight minutes to open his account for Alanyaspor as he made his competitive debut for the Turkish Super Lig side against Giresunspor at the Bahçeşehir Okulları Stadyumu on Monday evening.
The Nigeria national teamer joined Alanyaspor on loan for the remainder of the season on transfer deadline day in Turkey, on September 8.
Awaziem was thrown straight into the fray after few training sessions with his new teammates, starting in central defence alongside Nemanja Milunovic.
The Boavista loanee was there to head home from a couple of yards out after Emre Akbaba floated a free-kick into the box, which proved to be the game-winning goal with more than 82 minutes left to be played.
It was Awaziem's first goal at club level since October 21, 2017, when he found the net for Nantes in a Ligue 1 clash against Guingamp.
Prior to ending his association with Porto in July, he scored once for the first team in fifteen matches and twice in 62 apearances for the B team.
Alanyaspor's first home win of the season saw them climb to eleventh in the standings after four rounds.
Ifeanyi Emmanuel
Copyright ANS
All rights reserved. This material, and other digital content on this website, may not be reproduced, published, rewritten or redistributed in whole or in part without prior express written permission from allnigeriasoccer.com