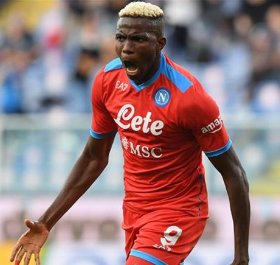 Victor Osimhen was in scintillating form on Thursday evening, scoring a brace as Napoli returned to the top of the Italian Serie A table thanks to their 4-0 rout of Sampdoria at Marassi.
The Nigeria international already has five goals to his name in all competitions so far this season, whereas it was only in April during the 2020-2021 campaign that he managed to score his fourth goal in Napoli colours.
Osimhen has been unarguably Napoli's standout player in the last one week after netting two superb goals that earned the Italian side a draw at Leicester City in the Europa League before registering three goals in back-to-back league matches.
Napoli's record acquisition gave a pitch side interview to DAZN shortly after the game, and here's every word he said :
Last season you scored your fourth goal in April. It's the 23rd of September and with this brace you have already scored five goals in the last one week. What happened this week?

"For me it is important to start well. The team, the coach and everyone have given me this confidence to go.

"I had some setback last season with injury and Covid and I think to be able to start well with the team is important. To try to help the team with goals is important for me because the team comes first before my personal ambition, and I am really happy with my performance and with what I'm doing with the team."

We know that Spalletti, his history, is a specialist with strikers.

"Of course he has been helping me a lot just like I said earlier. After the training he always takes me one on one with some finishing and I think to be able to play under such an experienced coach and a top one as that I am blessed and I am improving day by day.

"He's really helping me a lot so I want to repay him on the pitch with hard work and more goals for the team also."

We noticed that you talked a lot with midfielders. What type of indication do you give to them?

"I think even not only during the game, in the training we always talk to ourselves about how I want the ball, about how they want me to come to the middle to help them in the midfield. It is important to communicate, it doesn't matter if it is the captain or an average player in the squad.

"It is important to communicate and to know my teammates very well, and I think I'm adapting very well and mostly with Andre-Frank Zambo Anguissa because I know the rest of the players and they know me so well.

"It is important to talk to him and to be able to know what I really want from him also".
Ifeanyi Emmanuel
Photo Credit : sscnapoli.it
Copyright ANS