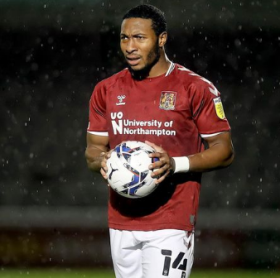 Two Nigeria-eligible players in Luton Town's Elijah Adebayo and Northampton Town's Ali Koiki have been included in the Championship and League Two Team of the Week respectively by football statistics website Whoscored.
Adebayo made it six goals in twelve appearances in the division when he bagged an equaliser in the 83rd minute as Luton Town and Derby County shared the spoils with a 2-2 draw at Pride Park Stadium.
In ninety minutes of action, the 1.93m center forward won an astonishing eleven aerial duels, a game-high figure, made one key pass and his two shots were on target while winning one foul for his team.
Looking at Adebayo's defensive stats, he made one tackle, one interception and two clearances, and gave away a team-high four fouls.
Former Crystal Palace schoolboy Koiki helped Northampton Town to post their second consecutive clean sheet in a 3-0 rout of Stevenage at Sixfields Stadium.
Koiki completed  a game-high three dribbles over the course of 90 minutes, won two fouls and two aerial duels, and was accurate in 65.5 percent of his passes.
Defensively, the left-back registered one tackle and foul clearances without committing a foul.
Ifeanyi Emmanuel
Photo Credit : ntfc.co.uk
Copyright ANS