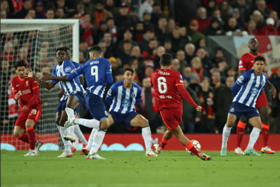 Liverpool maintained their one hundred percent in the group stage of the UEFA Champions League after beating Porto 2-0 at Anfield on matchday five.
Super Eagles left-back Zaidu Sanusi made his fourth start in the group stage and was one of the five Porto outfield players who put in a full shift.
Both teams headed into the dressing room at halftime with the scoreboard still reading goalless but the Reds were fortunate that the visitors did not take the lead on at least three occasions.
Sadio Mane thought he had opened the scoring in the 39th minute but the goal was disallowed with a narrow but correct offside decision.
Sanusi had an excellent performance in the opening forty five minutes, the Super Eagle was able to read the play and blocked several Liverpool attacks.
Seven minutes into the second half, the deadlock was finally broken by Thiago Alcantara, who unleashed a rocket into the bottom corner.
Mohamed Salah continued his extraordinary season in the 70th minute, firing in from fourteen meters after Sanusi had missed the ball.
With five points from five games, Sanusi and his Porto teammates go into matchday six against Atlético de Madrid still with a chance of qualification for the knockout stages.
Igho Kingsley
Photo Credit : uefa.com
Copyright ANS