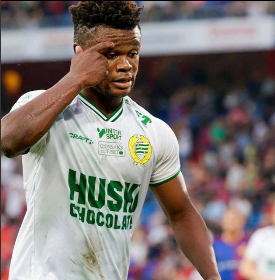 Contrary to reports in a section of the local media, Nigeria underage international Akinkunmi Amoo missed out on the Swedish Allsvenskan Young Player of the Year for 2021.
The versatile Hammarby winger was nominated for the accolade along with two other promising youngsters, namely Veljko Birmancevic (Malmo) and Hampus Finndell (Djurgardens IF).
At an awards ceremony held at Quality Friends Hotel in Solna on Tuesday, Birmancevic picked up the award for Young Player of the Year ahead of the talented Nigerian.
Assuming he won the award, Amoo would have followed in the footsteps of ex-IFK Göteborg wonderkid Alhassan Yusuf who clinched the accolade for 2019.
When contacted to verify claims that Amoo was awarded Young Player of the Year, Hammarby chief scout  Mikael Hjelmberg told allnigeriasoccer.com on Wednesday evening : "No, Amoo didn't win the Young Player award".
The Sidos Academy product impressed in his first full season in the Allsvenskan, netting nine goals while providing five assists in 29 appearances.
Nigerian striker Samuel Adegbenro took home the prize for best attacker in the Swedish top-flight after ending the campaign with seventeen goals to his name.
Ifeanyi Emmanuel