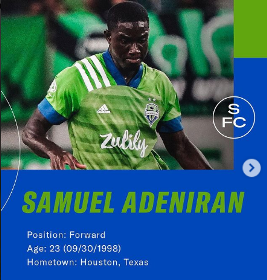 With a statement on their official website, Major League Soccer club Seattle Sounders have announced the signing of Nigeria-eligible attacker Samuel Adeniran.
The American-Nigerian has joined Seattle Sounders' first team from USL side Tacoma Defiance, the reserve team of the Sounders.
Aged 23, Adeniran has signed a one-year contract with club options for 2023 and 2024.
He spent time with European clubs Belenenses (Portugal), Guadalajara (Spain), Castellón (Spain), Kickers Emden (Germany) and Atlas Delmenhorst (Germany) before returning to his country of birth to join Tacoma Defiance in March 2021.
In the recently concluded season, he was the top scorer for Tacoma Defiance, tallying 13 goals in 30 appearances to break the club record for goals in a single season previously held by Justin Dhillon.
Adeniran made two appearances for Seattle Sounders in 2021, against Minnesota United and Austin FC in July.
He was voted USL Championship Player of the Week for matchday 25 after a second half hat-trick helped Tacoma Defiance thrash Orange County 4-1.
Ifeanyi Emmanuel
Copyright ANS