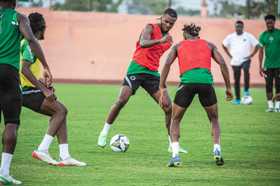 The Super Eagles held a recovery workout and light training session at VSTS-ANNEX, Roumde Adjia Stadium, Garoua on Thursday, a day after finishing the group stage of the 2021 Africa Cup of Nations with a hundred percent record, allnigeriasoccer.com reports.
As is the norm, the twenty-seven players were divided into two groups by manager Augustine Eguavoen -  those that started the last match against Guinea-Bissau and the other group contained the substitutes and players who did not taste action at all.
Leicester City striker Kelechi Iheanacho was present in the training session but was excused from taking part in the activities.
Spotted wearing a slip on slippers, the Super Eagles number 14 walked around alone as the starters against Guinea-Bissau were involved in jogging exercises.
As for the substitutes and non-starters, their own workout was more intense and they rounded off the training session with a practice game between Team Red and Team Green with eight players on each side.
Team Green contained Daniel Akpeyi, Kenneth Omeruo, Ola Aina, Olisa Ndah, Moses Simon, Chidera Ejuke, Peter Olayinka and Joe Aribo, while Maduka Okoye, Zaidu Sanusi, Chidozie Awaziem, Samuel Chukwueze, Frank Onyeka, Ahmed Musa, Henry Onyekuru and Taiwo Awoniyi made up the second group.
The interesting training game ended 4-3 in favour of the team wearing red, who were four goals up but almost allowed victory to slip away.
Onyekuru continues to impress in training.scoring two goals , Awoniyi made it 3-0 and Zaidu scored the pick of the goals during the training game with a long-range effort.
Ejuke, Olayinka and Simon were the scorers for the team in green.
Ifeanyi Emmanuel
Copyright ANS