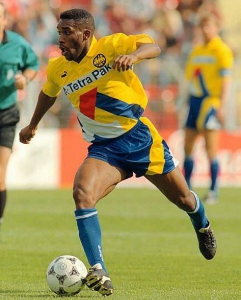 The official website of the German Bundesliga has compiled a list of the top ten Nigerian players in Bundesliga history.
Of the ten Nigerian players selected, two have won the Africa Cup of Nations - Austin Okocha and Sunday Oliseh, while four previous U17 World Cup winners in the shape of Jonathan Akpoborie (1985), Pascal Ojigwe (1993), Taiwo Awoniyi (2013) and Victor Osimhen (2015) made the list.
Others who made the cut include Anthony Ujah, Leon Balogun, Obafemi Martins and Victor Agali who all have international caps to their names.
Okocha is widely regarded as the best Nigerian player in history to grace the Bundesliga and the former Eintracht Frankfurt attacking midfielder etched his name into Bundesiga folklore with a spectacular goal against legendary goalkeeper Oliver Kahn in August 1993.
Akpoborie is Nigeria's record highest scorer and record appearance maker in the Bundesliga with 60 goals in 144 outings combined for Hansa Rostock, VfB Stuttgart and Wolfsburg, placing first ahead of former Schalke and Hansa Rostock striker Agali who is second in both categories with 143 matches and 32 goals.
Union Berlin striker Ujah, who has also worn the colours of Mainz 05, Werder Bremen and Cologne, is the third highest scoring Nigerian in Bundesliga history with 30 goals.
Hardworking midfielder Ojigwe was part of the famous Bayer Leverkusen side that earned three runners-up medals in the 2001-2002 season after losing the DFB and UEFA Champions League finals and finishing second in the league.
Ifeanyi Emmanuel
Photo Credit : eintracht.de
Copyright ANS