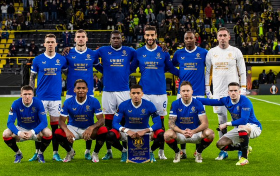 Erling Haaland watched on from the stands as Borussia Dortmund were humiliated 4-2 by Rangers in the first leg of their Europa League knockout round playoff on Thursday evening.
The Norway international has not featured for Dortmund in their last three matches after going off injured in the second half of the Bundesliga clash at Hoffenheim.
Haaland, who has scored a remarkable 129 goals at club level in his professional career at the age of 21, is battling to be fit for the return leg of the Europa League clash at Ibrox Stadium next Thursday.
Rangers defender Calvin Bassey is relishing the opportunity of coming up against one of the best strikers in the world at the moment but has stressed that he is focused on the upcoming match against Dundee United.
The Super Eagles hopeful was one of the standout players for Rangers on Thursday, helping them pull off a remarkable win at the Signal Iduna Park.
Speaking to reporters at Friday's press conference, Bassey said : "Of course, you always want to test yourself against the best. Obviously, he is one of the best strikers in the world without a doubt.

"You could check his records, check his stats so obviously you always want to see how you do against these sort of players.

"We've got the game on Sunday and I think that's our main focus for now. We're just focusing on getting three points in the league and just carrying on that good form onto Sunday".

Predominantly a left-back, Bassey has been used more often in the center back position this season as cover for compatriot Leon Balogun who has been in and out of the squad due to injuries.
Igho Kingsley
Photo Credit : rangers.co.uk
Copyright ANS