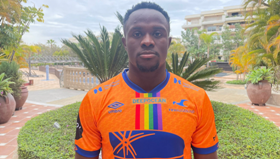 Through their official website, Norwegian Eliteserien side FK Haugesund have confirmed the permanent acquisition of Nigerian winger Hilary Gong.
The 23-year-old arrived at FK Haugesund's training camp in Marbella earlier this week and signed on Friday a contract that initially keeps him at the club until the end of the 2022 season.
Gong first made his name with Slovak club AS Trencin, where Super Eagles stars Kingsley Madu, Moses Simon and Samuel Kalu began their careers in European football.
After 11 goals and 12 assists in his first full season at AS Trencin, he was sold to Dutch Eredivisie side Vitesse Arnhem, for whom he made 21 appearances.
Speaking after putting pen to paper, Gong told FK Haugesund's official website : "I'm very pleased. Now I just want to get started and have a good season and give my very best.
"I want to help the team as much as I can and help us have a good season.
"The players have received me very well. It's a very nice bunch with a lot of good humor.
"It is a very positive group of players and I really appreciate the reception I have received."

Gong could make his competitive debut for FK Haugesund when they tackle Sandefjord in their season opener on April 3.
Ifeanyi Emmanuel
Copyright ANS