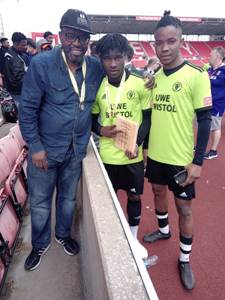 Former Derby County striker Dean Sturridge, Xavier Daminet who is a scout working for the Belgian Federation and a Stoke City talent spotter were also in attendance.

Former Golden Eaglets captain Chukwuemeka Prosper Egbu and Jerry Pius Omeke were ineligible for the game and Adrian Ugonna Ezeihuaku was on his way to honour a call up to the Golden Eaglets but their absence did not affect Brooke House College as they totally outclassed their opponents to cruise to victory.

Thompson Ishaka scored both sides of half time after the opponent's canceled his first goal. Kelechi Sopuruchi scored  the third goal to secure victory in the dying minutes.

It has a reputation of nurturing talented youngsters to stardom and has many Nigerian players in their ranks.