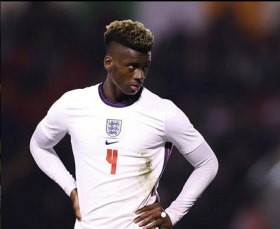 Three teenagers of Nigerian descent have been named in the England squad for the forthcoming UEFA U19 European Championship in Slovakia.

Aston Villa midfielders Tim Iroegbunam and Carney Chukwuemeka, and Brentford fullback Daniel Oyegoke have been named in a 21-man group.

Shola Shoretire (Manchester United), Samuel Edozie (Manchester City) and Tobi Oluwayemi (Celtic), who played for England U19s last season, have not been selected on the roster by manager Ian Foster.

Iroegbunam, Chukwuemeka and Oyegoke are provisionally cap-tied to England and helped the Young Lions qualify for the last eight of the U19 EURO.

Iroegbunam joined Aston Villa last summer and made three appearances for the club in the Premier League last season, while Chukwuemeka is a product of the Villa academy and has totaled sixteen games for the first team.

Right-back Oyegoke moved to Brentford last summer and featured on the bench for Thomas Frank's team against Everton and Stoke City in the Emirates FA Cup and Carabao Cup respectively.

The Young Lions will face Austria, Serbia and Israel in the group stage of the European Championship.