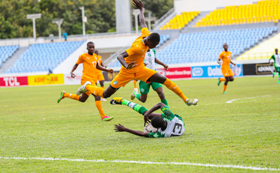 The Golden Eaglets on Tuesday advanced to the final of the WAFU U-17 Championship at Cape Coast stadium with a 3-1 win over the Baby Elephants of Cote d’Ivoire.

All Nigeria Soccer here presents the five things noted from the match.

The Golden Eaglets were initially in the game subdued by the physical approach of their opponents. The Ivorians were also theatrical of time wasting.

No focal point for Ivory Coast

The Ivorians were dangerous from the flanks but would have created more problems for the Nigerians if they had a striker that worried the duo of Jeremiah Olaleke and Miracle Ogwor.

The ten-man Ivorian side showed disciplinary issues and surely affected them.

The captain got himself yellow carded for his reaction to the second yellow card to Makhete N'Diaye.

The numerical advantage counted for Nigeria.

Already a star in the making, the youngster was Man of the Match and deserves to be awarded the overall best player in Cape Coast.

The Eaglets coached by Nduka Ugbade improved as the game went on but they must improve their ball retention and game management.

They gave away the ball away and it put them under enormous pressure.