...the complete Nigerian football portal
Subscribe
Olise's unavailability : How can Patrick Vieira set up his attack against Arsenal?
Published: August 05, 2022 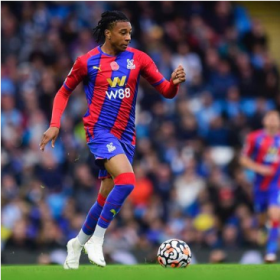 The long-awaited return of the Premier League is here and Mikel Arteta's Arsenal would be facing Patrick Vieira's Crystal Palace in a classic showdown at Selhurst Park tonight.

The same fixture last season saw the Gunners lose by three goals to nil. If anything, it shows that the Gunners would need to be at their best in order to gain anything from the upcoming match.

The big news for Palace's squad is the pending absence of Nigeria-eligible midfielder Michael Olise who has been kept out of action since sustaining a foot injury at the end of last season.

Crystal Palace has been one of the most flexible teams in the Premier League since Vieira's arrival with the team shifting from a 4-3-3 to 4-2-3-1 and 4-5-1 effectively.

However, with Olise unavailable, allnigeriasoccer.com takes a look at how Vieira can set up his team for Arsenal's visit.

Assuming the Palace' boss sticks to the 4-3-3 which is most likely, Nigeria-eligible midfielder Malcolm Ebiowei can take Olise's place on the left side of the attack with Zaha and Mateta, Edouard, Benteke or Ayew completing the attacking three.

Eberechi Eze can also take a spot among the two number eights.

However, if a change to a 4-2-3-1 is adopted, Eze is most likely to play as an advanced midfielder.