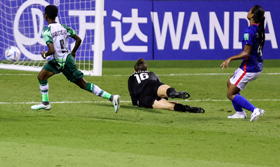 Nigeria's Super Falconets in the early hours of Friday (Saturday night in Costa Rica) began their quest for a FIFA U-20 Women’s World Cup glory on a winning note as they defeated France 1-0 at the Estadio Nacional de Costa Rica, San José.

Striker Flourish Sabastine was the heroine for Christopher Danjuma's lasses as her 85th minute goal claimed three points for the African powerhouse.

The Falconets started brightly and created a chance to go ahead within the first 10 minutes as striker Sabastine threatened to work her way into the France goal but the French defence swiftly cleared the ball from danger.

The game was temporarily halted after 20 minutes of play due to terrible wind conditions and heavy rainfall.

Both teams were back in action about 30 minutes later but it was the Les Bleuettes that looked hungrier than their Nigerian foes after the resumption.

However with the tempo of the of the match swinging at will, Idoko had a 56th minute snapshot blocked by the France goalkeeper after a good work by Sabastine.

The French threatened to score as they waltzed their way into the Nigerian box but captain Demehin cleared the ball for a corner.

The VAR was required to ascertain if Super Falconets goalkeeper Monle Oyono was fouled before France scored a goal in the six yard box and it was correctly overruled.

Moments after that incident and five minutes before the end of the game,Idoko pounced on a long ball by keeper Oyono and found Sabastine who sliced her effort to the far right corner to continue her scoring streak for the Nigerian U-20 side.

The 17-year-old striker grabbed seven goals during the qualifiers enroute to qualification.