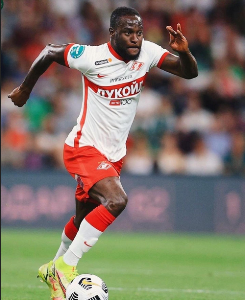 Spartak Moscow, through their media chief Dmitry Zelenov, have provided an update on the recovery of 2013 Africa Cup of Nations-winning winger Victor Moses.

The former Chelsea star successfully underwent surgery in Germany on Wednesday, August 17 and is expected to be out of action for at least six months.

Moses suffered a serious injury during the first half of Spartak Moscow's 2-0 win against Ural on matchday four in the Russian Premier League and was later diagnosed with an Achilles tendon injury.

The Spartak Moscow players showed their support for the recuperating Nigerian ahead of the derby with Dinamo Moscow on Saturday.

They honoured the winger with t-shirts reading, 'Get well soon Victor', and his picture on the shirts.

Discussing Moses's recovery, Zelenov said to Sport Express : "The recovery is going well, as far as I can tell at this early stage.

"He underwent surgery and is now in rehab. Good mood, smiles, says hello to the guys. By the way, today you will be able to notice: the team will come out in T-shirts in support of Victor Moses.