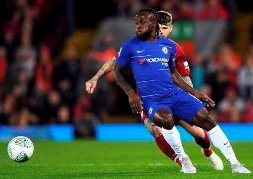 The Spartak Moscow winger suffered a serious injury during the first half of Spartak Moscow's 2-0 win against Ural on matchday four in the Russian Premier League on August 6, and was later diagnosed with an Achilles tendon injury.

Alexey Lazutkin has posted a video of the former Nigeria international in the gym, where he was doing a leg exercise.

Depending on how his recovery goes, Moses will need to wait for a minimum of six months before returning to action.

Theoretically, he could return to the pitch when Spartak Moscow face off with Ural in their first game after the winter break on March 4, 2023.

Prior to Moses's spell on the sidelines, he was playing very well in the new season with two goals in four games.

Without their Nigerian star available for selection, Spartak Moscow have won one match and were beaten by Dynamo Moscow in their last Premier League game.