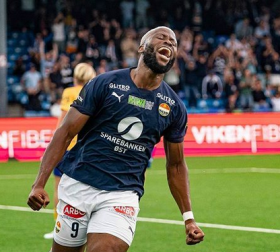 Allnigeriasoccer.com's review of the Nigeria-eligible players that found the net for their respective European clubs in league matches on Sunday, September 18, 2022.

We begin in Belgium,Super Eagles hopeful Victor Boniface scored a stoppage time goal to seal a 2-1 away league victory for Royale Union Saint-Gilloise.

Oyewusi opened the scoring in the 25th minute.

The 23-years-old now has five goals in 15 league appearances this season.

Offia opened the scoring following a well placed pass from Mohammed Saeid in the 19th minute to take his tally for the 2022 season to ten goals.

In Norway, Fred Friday scored a goal for Strømsgodset in their 4-1 win Kristiansund BK on Sunday.

The 27-year-old who played the entire duration of the game scored his fifth goal of the season in the 77th minute.

In Finland, former Nigeria U20 internatonal John Owoeri was on the scoresheet for IFK Mariehamn in their 6-0 win over FC Lahti.

The 35-year-old scored an 85th minute penalty for the hosts.