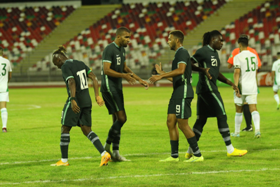 Nigeria's Super Eagles will on Tuesday evening face Algeria in the much awaited international friendly between nations that failed to qualify for the 2022 FIFA World Cup in Qatar.

The Eagles had on Friday evening come from a goal down to earn a respectable 2-2 draw against the home-based Algerian national team in a test match as Nigeria's home-based Eagles originally billed to play the Fennecs did not qualify for the African Nations Championship (CHAN) which Algeria will host in 2023.

With the spate of injuries that has decimated the Eagles, allnigeriasoccer.com has provided the Super Eagles best starting lineup that manager Jose Peseiro could name to face a strong Algerian team.

Omonia Nicosia goalkeeper Francis Uzoho could be back in action for the Eagles in the friendly against Algeria after the error-strewn performance of Maduka Okoye in the test friendly on Friday.

Aina is likely to get the nod against a nippy Algerian attack at the right back position over Chidozie Awaziem.

Awaziem is a good defender and his versatility comes handy but Aina could be handed the job because of his propensity to go forward down the channels.

This is further backed by the injuries to the forward players in the team, majority of whom are inverted wingers anyway and always drive in-field.

The Porto star is likely to be the one tasked to stop Manchester City forward Riyad Mahrez on Tuesday evening.

That will be a huge job to execute but one that Sanusi can do when on form.

The Ajax man like Awaziem is a player capable of playing in two positions in defence.

On this occasion, our smart money is on Bassey starting on the left back side of the central defence ahead of Valentine Ozornwafor.

Super Eagles head coach Jose Peseiro is expected to hand Kelvin Akpoguma the chance to impress ahead of the November 17 friendly against Portugal as well as the 2023 Africa Cup of Nations qualifiers from March 2023.

The trio of Frank Onyeka, Raphael Onyedika and Alex Iwobi are expected to start in midfield on Tuesday night.

Frank Onyeka hasn't been regular at Brentford but the limited availability of players for this game means that he will have a chance to impress.

Frank Onyedika has been a revelation at his Belgian club, Genk this 2022/2023 season and with the absence of Wilfred Ndidi and Joe Aribo (the latter not invited) there's an almost guaranteed chance that the rangy player will make his official debut in the Algeria friendly.

Alex Iwobi has been in great form at Everton and thankfully took that form to the national team. His goal against the Algerian B team was simply 'World class' standard.

Now, there is even talk of a contract extension for him at Everton. Without doubt, Iwobi plays as the attacking midfielder on Tuesday.

We believe that Cyriel Dessers and Saviour Godwin will come off the substitutes bench on Tuesday meaning that in-form Lorient striker Terem Moffi who has scored six Ligue 1 goals only behind PSG superstars Neymar and Kylian Mbappe with eight and seven goals respectively will lead the line.

Injuries have really dealt a blow to Jose Peseiro-led coaching crew which saw the likes of Victor Osimhen, Umar Sadiq and Emmanuel Dennis all ruled out.

Henry Onyekuru, Samuel Chukwueze and Ahmed Musa are also not available for the match.

Nantes winger Moses Simon should start and is expected to bring his spectacular AFCON form to bear on Tuesday.