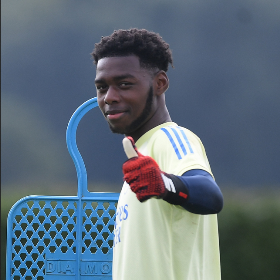 Arsenal's Nigerian goalkeeper Arthur Okonkwo continued his impressive loan spell at Crewe Alexandra as they were held to a goalless draw by Carlisle United at Brunton Park on Saturday.

In search of regular game time following his promotion to the Gunners first team in the summer of 2021, Okonkwo joined Crewe Alexandra on a season-long loan in July.

Against Carlisle United, he made a great save to deny Gibson from breaking the deadlock in the 52nd minute, pushing the winger's shot from 30 yards out behind for a corner.

And with fifteen minutes remaining, the Arsenal loanee was alert when Patrick tried his luck after creating space for a shot.

Okonkwo has been one of the revelations for a Crewe Alexandra team who are four points behind the promotion play-off positions with eleven games played.

The 21-year-old has yet to make his senior debut for Arsenal but has been named in ten matchday squads including seven in the Premier League.