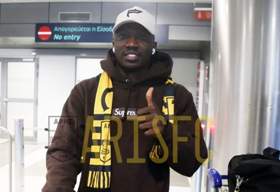 The former Stoke City midfielder joined Aris in the hours leading up to the close of the summer transfer window in Greece but could not link up with the Greek club until Tuesday due to a visa delay.

Etebo has not played competitively at club level since coming off the bench in the 81st minute of Watford's 5-1 loss to Leicester City at The Vic on May 15, 2022 - more than four months ago.

The 26-year-old has declared that he's ready to make his official debut for Aris in Sunday's league game against AEK Athens,

In quotes relayed by Gazzetta Greece, Etebo said : "It may have been a while since my last official game but all this time I worked very hard to be ready and if the coach asks me to, I can also play in the next game against AEK,"

He added : "Of course I know the coach as he was my opponent during my time in England. I'm looking forward to this collaboration and I think it's going to go well."

When asked about the information he gathered about Aris, Etebo said :  "First of all I'm happy to be at Aris. It is a new page in my career and what is important is to join the family, become part of the team and help it in the areas it needs.

"It wasn't necessary to gather information about Aris because I know who the team is. I'm interested in entering it, giving all my strength and succeeding."