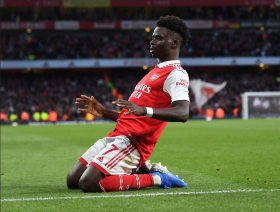 Football Insider says the North London club are confident of reaching an agreement over a contract renewal for the Hale End Academy graduate.

Saka is expected to sign a deal that will see him join the club's top earners who earn in the region of £200,000 per week.

The 21-year-old winger has been one of Arsenal's most influential players in recent seasons and is currently on a deal that'll expire in the summer of 2024.

Saka made his Arsenal debut as a 17-year-old in Arsenal's 3-0 win over Vorskla Poltava in the group stage of the UEFA Europa League that was played in November 2018.

He has gone on to make 151 appearances across all competitions,, registering 28 goals and 35 assists for the Gunners.

The London born winger of Nigeria descent is amongst the 26 players selected by Gareth Southgate to represent England at the FIFA 2022 World Cup holding in Qatar.