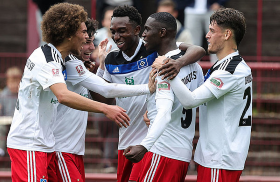 Transfermarkt.de claims that the 20-year-old has been scouted by several clubs in Germany including five from the 2. Bundesliga and one from the Bundesliga.

Per the report, initial contact has been made with the player but official negotiations can only take place next month.

Otuali will enter the last six months of his contract with Hamburg in January 2023 and he could be leaving the club on a free transfer next summer if he does not put pen to paper on a new deal.

He has shone at Hamburger SV II, scoring 16 goals in 37 matches and has registered six assists, but has yet to receive a call-up for a first team game.

The Nigerian joined Hamburg on a free transfer in 2021 after stops at the youth teams of Holstein Kiel, Eimsbütteler TV, SV Nettelnburg/Allermöhe, FC Erzgebirge Aue and VfL Wolfsburg.

Otuali wants to be assured of playing time before making a decision on his next move.