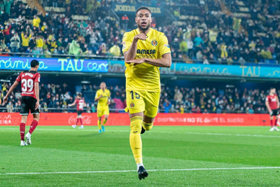 Everything indicated that Nigeria native Arnaut Danjuma was going to link up with Alex Iwobi at Everton after the Villarreal star completed medical tests as a new Toffees player last weekend.

Several Premier League clubs were interested in signing the Lagos-born winger and he earlier favoured a move to Everton, only for the player and his agent to change their minds.

The Toffees' Premier League rivals Tottenham Hotspur have made a last minute move to hijack Danjuma's proposed switch to Goodison Park and the winger is on the brink of completing a transfer to the north London club.

According to Italian transfer market expert, Fabrizio Romano, Tottenham are prepared to sign all the documents with Villarreal and Danjuma in the morning after medical tests in London.

Tottenham are prepared to sign all the documents with Villarreal and Arnaut Danjuma in the morning after medical tests in London. ⚪️🏁 #THFC

Loan move confirmed, not permanent deal or with any mandatory clause.

Everton are furious and surprised after deal hijacked. pic.twitter.com/VxF6mci5YH

Barring any unforeseen circumstances, the cap-tied Netherlands international of Nigerian descent will join Tottenham Hotspur on loan for the remainder of the season without a mandatory clause included in the deal.

Danjuma has rubbed shoulders with attack-minded Super Eagles players as he was teammates with Taiwo Awoniyi at NEC Nijmegen in 2016-17, Emmanuel Dennnis at Club Brugge in 2018-2019 and linked up with Samuel Chukwueze at Villarreal in August 2021.