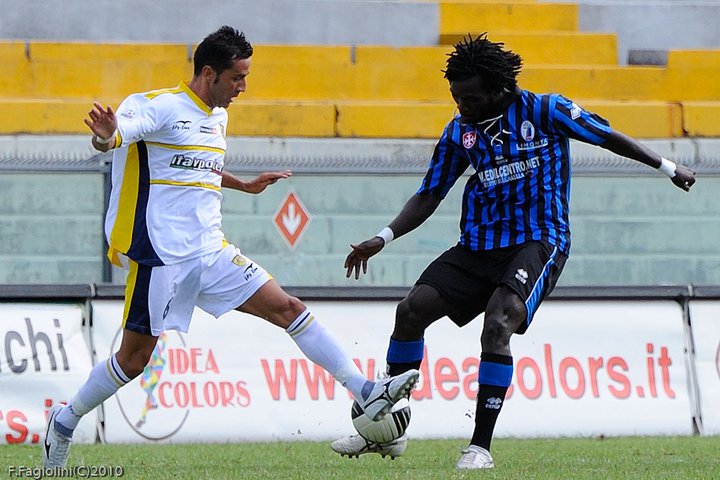 New Grosseto signing Kenneth Obodo in an exclusive chat with allnigeriasoccer.com has specifically denied media reports suggesting he had a Ghanaian Passport.

Recall that the 27 - year - old central midfielder signed a two - year contract with the team from Tuscany last month; moving from AC Pisa where he had spent three seasons.

'' I don't have a Ghanaian Passport, and I am not from Ghana. People refer to me here in Italy as the younger brother of Christian Obodo. We should ask ourselves : '' Is Christian from Ghana?'' So, it's very strange when I get to read these reports saying I have Ghana nationality. The other day , during a game, the commentator referred to me as a Ghana player. Maybe I should be invited to the Black Stars,'' said a bemused Kenneth Obodo to allnigeriasoccer.com in a telephone conversation after training on Tuesday.

Finally, Kennth Obodo says he has settled down at Grosseto, and is looking forward to the start of the Serie B next weekend, August 24.

''I have been in Italy for more than 3 years, so I did not find it difficult adapting to my new teammates at Grosseto. Francesco Moriero (coach, ed) is an excellent and experienced tactician. He played with Taribo West and Ronaldo at Inter Milan.

''I have been involved in most of the club's preseason games which suggests that I will be a vital part of the group this season. We hope to do well in the second division, and qualify for the Serie A a the end of the season ,''  Kenneth Obodo concluded.

Grosseto lost at home by 1- 3 to Carpi, a third - tier club, in the Coppa Italia last weekend. Kenenth, who has the same playing style as Christian Obodo, lasted the entire duration of the game.