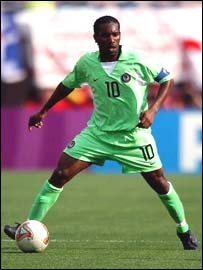 The former Bolton midfielder, who is in South Africa cheering the Super Eagles, has predicted a difficult match but is optimistic Nigeria can win her third Afcon laurel.

''I’m really proud to be a Nigerian right now, this is where every team wants to be and we are in the final. So far the team has done well. We have been taking a lot of stick in the last few years and a lot has been said. This team has done very well.

Nobody expected this team to do this well, we are looking forward to the final but we know it is not done yet. Having got to this stage now, we have to give everything to win it,'' Okocha told cafonline.com.

He added: ''I think they (Burkina Faso,ed) are a good team, it is not a fluke that they are in the final. We played them before in the group stages and we drew. After that game, both sides have improved a lot. It is not going to be easy, the good thing for them is that they have nothing to lose; they are the underdogs. But I think if we do our business on the day we shouldn’t have many problems. I don’t expect a humiliating scoreline – but I think we will do well.''

Augustine Okocha, 39, was the top scorer at the 24th edition of the African Cup held in Tunisia. He scored 4 goals including 3 strikes in the knock rounds and was named in the team of the tournament.