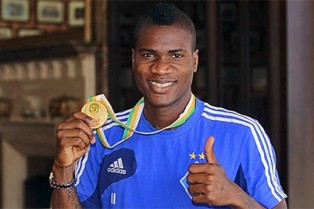 Brown Ideye opened scoring for Ukrainian Cup winners Dynamo Kiev as they defeated Zorya 3 - 1 in their last Premier League match of this season.

The Super Eagles striker found the back of the net in the 69th minute after an assist from Morocco National Teamer Younès Belhanda.

The 25 - year - old, who surprisingly did not make the provisional World Cup roster, ended the season with 5 goals, his lowest tally for the past six seasons.

Apart from his strike on Sunday, he also registered his name on the score- sheet in matches with Illichivets, Vorskla, Volyn and Karpaty.

Dynamo Kiev, whom he is under contract with for the next two years, will feature in the group stage of the Europa League next term.