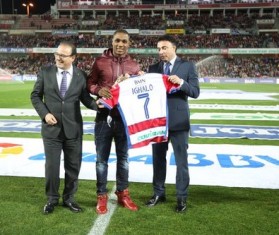 Watford sensation Odion Ighalo was a special guest for Granada’s La Liga tie at home to Real Madrid on Sunday.

The Nigeria international was introduced to the supporters of Granada just before kickoff at the Estadio Nuevo Los Cármenes.

The 26-year-old Ighalo was presented with the number seven jersey with his name printed at the back of the jersey; a gift from the Andalusian club who appreciated his contribution in their promotion to the top-flight at the end of the 2010-11 season.

The former Lyn Oslo star spent five seasons with Granada on loan from Udinese, helping the club gain promotion from the third-tier to La Liga.

Ighalo would have been impressed with the performance of ex Flying Eagles star Isaac Success, who was in action for 90 minutes against Real Madrid.