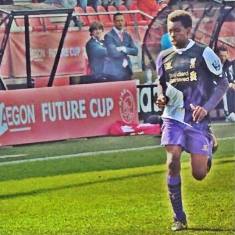 Liverpool fans reacted positively to the display of former Golden Eaglets trainee Ovie Ejaria, as the Anfield side lost 1-0 to Chelsea in the International Champions Cup on Thursday morning.

The highlight of the 18-year-old’s performance was his backheel assist to Roberto Firmino, only for the goal to be ruled out for offside, and he showed good positional play and movement off the ball.

Below are some of the comments on social networking site Twitter :

@LiverpoolFF tweeted : “Ovie Ejaria probably Liverpool’s stand out performer in that half. Deserves to be in this team still.”

@JosephJanerique tweeted : “Ovie Ejaria is an outstanding talent as has been witnessed”

Ovie Ejaria was in action for 63 minutes against the Blues and was cautioned by referee Baidomero Toledo in the 39th minute for a late challenge.