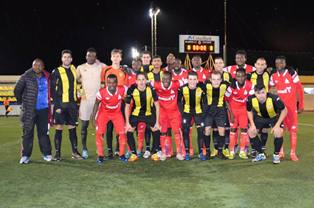 The rip-roaring contest which finished 3-3 at Estadio Ciudad Deportivo Pamesa was United’s second in their fifth and final phase of pre-season in Spain.

Emeka Ogbugh had given United a deserved lead inside the opening 10 minutes but the hosts battled back and equalized moments later after Festus Austine, under pressure, bundled the ball past Abiodun Akande in goal for United.

The Spaniards began the second half on the front foot and got due reward when Charly Garcia smashed home to put them 2-1 up, six minutes after the break.

Stung into action, the Pride of Rivers reacted gamely and turned the game on its head following excellent goals from Godbless Asamoah and Nzebe Anaezemba.

With United seemingly cruising to a second successive win in Spain, Richi popped up late to plunder a barely-deserved equalizer for the home side.