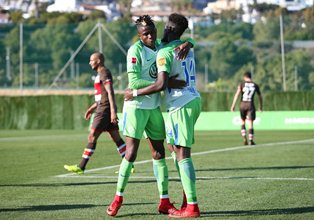 Wolfsburg continued their preparations for the resumption of the second half of the Bundesliga with a friendly against St Pauli at their training camp in Marbella on Friday, January 5.

The second-tier club took an early lead through Waldemar Sobota but at the end of the first half it was 2-1 Wolfsburg, thanks to goals from Jeffrey Bruma and Victor Osimhen in the 12th and 26th minute respectively.

The Nigeria international slotted home after he was fed by Liverpool loanee Divock Origi from the right wing.

Daniel Didavi headed home a cross from the right by Paul Verhaegh to make the final score 3-1.

Osimhen has made five appearances off the bench in the Bundesliga this season and was involved in the last three games played by the Green-Whites prior to the winter break.

Both the striker and young Nigerian defender Felix Uduokhai were replaced in the 65th minute against St Paul.

Wolfsburg travel to Borussia Dortmund in their first competitive game of 2018 next weekend.